Aortic prosthesis infection is a challenging complication of aortic bypass surgery with high morbidity and mortality. We report a laparoscopic washout of an infected aorto-bifemoralperigraft collection with radiologic guidance using a nephroscope. The track was dilated with Endouro balloon and sheath to allow access. The cavity was copiously irrigated with saline and aqueous iodine solution. Surveillance computed tomography scan showed no new collection, thrombosis, aneurysm or fistula from the bypass graft. Bilateral lower limbs remained well perfused. Minimally invasive retroperitoneal washout may be a viable alternative to graft explant and extra-anatomical bypass in aortic graft infection.

Aortic prosthesis infection remains one of the most challenging complications of aortic bypass surgery. Standard treatment encompasses graft explant, wide debridement and extraanatomical bypass, which carries a mortality rate of 20-40% [1-6] and limb amputation rate of 30-70% [1,2]. However, patients with an infected aortic graft are often critically ill and are thus unable to tolerate major open surgery. We present a novel technique for image-guided minimally invasive retroperitoneal washout of an infected aortobifemoral graft.

We performed the procedure on a 71-year-old male who developed a peri-graft infected collection one month after an initial aortobifemoral bypass.

The patient first presented with progressive claudication and subsequently developed tissue loss with left fifth toe dry gangrene four months later. His medical history was significant for hypertension and chronic kidney disease with a baseline creatinine level of 167 mmol/L and estimated glomerular filtration rate of 34 ml/min. The patient’s ankle-brachial Pressure Index (ABPI) was 0.58 on the left and unrecordable on the right. Duplex ultrasonography (Figure 1) showed distal aortoiliac disease with bilateral common iliac artery occlusions, as well as long segment complete occlusion of bilateral superficial femoral artery to the popliteal artery. Below knee examination showed right anterior tibial artery occlusion and patent left below-knee vessels. The decision was made against endovascular revascularisation given the poor kidney function, and if tissue loss persisted after the aortobifemoral bypass, for future femoral-popliteal bypass. 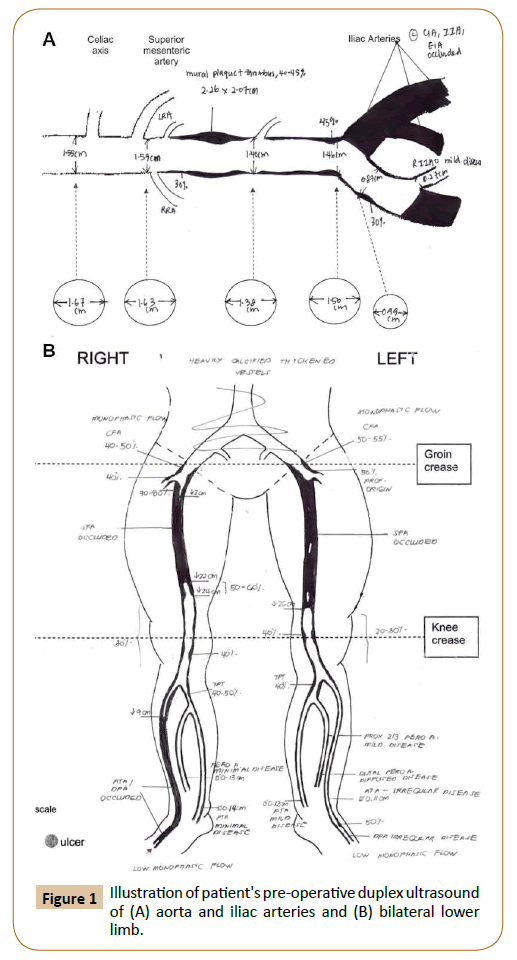 Figure 1: Illustration of patient's pre-operative duplex ultrasound of (A) aorta and iliac arteries and (B) bilateral lower limb.

The patient, however, developed a large right retroperitoneal haematoma with intra-abdominal hypertension and had an intra-abdominal pressure of 24 mmHg on post-operative day three. This was further complicated by thrombocytopenia and acute kidney injury with a creatinine of 560 μmol/L. To avoid further kidney injury, we decided for a laparotomy, washout, evacuation of retroperitoneal haematoma and haemostasis. Intra-operatively, there was a slow venous ooze from the right retroperitoneal tunnel for the right limb of the aortobifemoral graft-this was thought to be the cause of the haematoma. Haemostasis was secured with diathermy, Surgicel (Ethicon, Ohio, USA), HaemoCer™ (BioCerEntwicklungs-GmbH, Bayreuth, Germany), FloSeal™ (Baxter, Illinois, USA) and direct pressure.

A midline fascia dehiscence and infection were noted on postoperative day seven, with a return to operating theatre for laparotomy, washout, small bowel resection, debridement of abdominal wall fascia and temporary abdominal closure. At the time of the repeat surgery, there was no retroperitoneal haematoma or intra-abdominal collection. The abdominal cavity was subsequently closed with Permacol™ (Medtronic, Minneapolis, USA) biological mesh on post-operative day 12.

Computed tomography was performed one month later to address the patient’s persistent fever, and this showed a large 11.9 x 9.2 x 13.6 cm retroperitoneal collection (Figure 2). His white cell count was 30.8 x 109/L, and procalcitonin was 2.02 μg/L. The patient then underwent imaging-guided drainage of the collection on the same day. Despite repeated attempts at percutaneous drainage, there was recurrent large right retroperitoneal collection. Although fluid, fungal and acid-fast bacilli culture did not have significant growth, bacterial sequencing was positive for Proteus vulgaris. We diagnosed aortic prosthetic graft infection given positive culture and large recurrent collections. The patient's post-operative course was complicated by ventilator-associated pneumonia, acute-on-chronic kidney injury requiring dialysis, coagulopathy, atrial fibrillation, and ileus, with labile blood pressure requiring intermittent inotropic support; and we decided that mortality risk was exceedingly high for repeat laparotomy, graft explantation and extra-anatomical bypass. However, because of the high mortality associated with graft infection, the decision was made for minimally invasive retroperitoneal collection washout via a retroperitoneal approach similar to percutaneous nephrolithotomy. His white cell count was 10.7 x 109/L, C-reactive protein was 63.8 mg/L, and procalcitonin was 0.85 μg/L before surgery. The procedure was performed in the operating theatre under general anaesthesia, with antibiotics continued perioperatively. We placed the patient in a lateral position, and the area around the existing radiologically placed drain was prepped within the field (Figure 3A). The drain was removed over a 0.035" Starter J Curved wire (Boston Scientific, Massachusetts, USA) under imaging guidance (Figure 3B). The drain track was entered through the right lateral abdominal wall and traversed the retroperitoneum inferior to the right kidney to end within the collection, which was just adjacent to the bypass graft (Figure 3C). The track was dilated over an X-FORCE N30 Nephrostomy Balloon 15 cm x 8 mm (Bard, Georgia, USA) and the accompanying bevelled polytetrafluoroethylene (PTFE) sheath was inserted over the balloon (Figures 3D-3G). A 24 French High-Flow Nephroscope (Olympus, Hamburg, Germany) was then inserted (Figure 3H), and irrigation with saline was performed under vision (Figure 4). The aortobifemoral graft was not visualised during the procedure. The effluent was sent for Gram stains and culture. Finally, aqueous iodine was instilled for irrigation and after that washed out with saline via the nephroscope. We placed A 15 French size Blake silicone drain (Ethicon, Ohio, USA) at the end of procedure into the retroperitoneal space. Figure 3: Intra-operative photograph and fluoroscopic images demonstrating; (A) the existing radiologically placed drain; (B,C) removal of the drain over a guidewire; (D,E) the dilatation of the tract with a nephrostomy balloon; (F,G) insertion of the 24 French size sheath and (H) nephroscope within the retroperitoneal space. 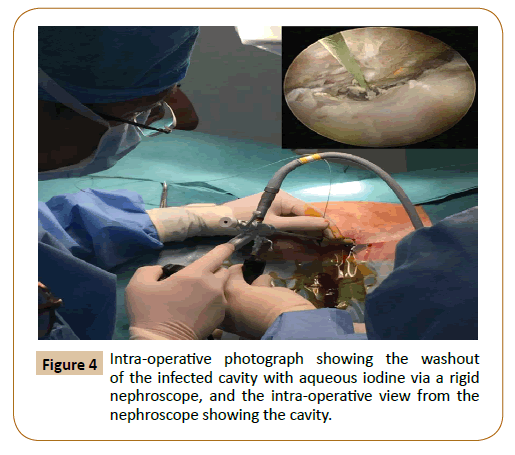 After the procedure, the patient returned to the intensive care unit and continued on broad-spectrum antibiotics. The inflammatory markers were trended post-procedure, and bilateral lower limbs pulses monitored through daily bedside Doppler ultrasound.

Post-operatively, the patient's inflammatory markers improved, and white cell count returned to normal values within two weeks after the washout. White cell count was 7.3 x 109/L, C-reactive protein was 29.6 mg/L, and procalcitonin was 0.52 μg/L. Intraoperative fluid culture from the washout returned negative for any bacterial growth. Interval computed tomography of the abdomen at one week and one month (Figure 5) after the operation showed no thrombosis, aneurysm, leak or fistula. Bilateral lower limbs pulses were monitored through daily bedside Doppler ultrasound and remained well perfused. Figure 5: Interval computed tomography of the abdomen at one month after surgery.

Patient's post-operative course in the intensive care unit was however protracted and complicated by recurrent episodes of ventilator-associated pneumonia, Elizabethkingiameningoseptica line infection and bacteraemia, intestinal cytomegalovirus infection with, a progression of kidney disease and stroke. Despite maximal support, the patient continued to deteriorate, and he demised seven months after the initial aortobifemoral graft bypass surgery.

Surgical treatment of aortic bypass graft infection aims to eliminate infection while maintaining perfusion to the lower limbs. Traditionally, this is achieved through graft explant and extra-anatomical bypass through an uninfected route, which can be complicated by aortic stump blowout, graft reinfection and graft failure [1,3]. Secondary graft infections occur in approximately 10% [1,3],and primary bypass graft patency is about 50-70% [1,3]. On the contrary, for those with an infected graft left in situ, the mortality rate within two years can be up to 100% [4,5].

Conservative treatment of aortic graft infection may be preferable for those with severe illness and whose comorbidities are considered too high risk for major surgery, or where the aortic graft cannot be removed easily [6,7]. Options include long term antibiotics, catheter drainage, and open surgical debridement without explantation [2,6]. Muscle and omental flaps have been used as adjuncts to primary conservative therapy [2,6]. While infection may be controlled in some patients, there is a low probability of graft sterilisation with conservative treatment [6]. The video-assisted retroperitoneal debridement (VARD), which has a similar approach, has been recently established as a viable surgical treatment for infected pancreatic necrosis. Compared to primary open necrosectomy, a step-up approach involving percutaneous drainage and, if necessary, a subsequent minimally invasive retroperitoneal necrosectomy, was shown to reduce new-onset multiple-organ failure [8,9]. While not known to reduce mortality, VARD is now an accepted surgical management of infected pancreatic necrotic collection. This case is the first described minimally invasive video-assisted retroperitoneal washout of an infected aortic graft collection.

In a critically ill patient, the recovery from a shorter and less morbid operation is crucial. A minimally invasive retroperitoneal washout allows for visualisation of the infected cavity with a thorough washout intra-operatively and reduces the risk of wound complications. As there was on-going midline wound infection in our patient, washout through the previous incision may contaminate the graft further. Minimally invasive washout through an uninfected field was therefore preferred.

Minimally-invasive retroperitoneal washout may be a feasible alternative for debridement and source control in patients who are critically ill.

All authors have no conflicts of interest to disclose.