Objectives: The objective of this study is to ascertain that the catheter directed thrombolytic therapy for acute deep vein thrombosis results in significant reduction in the thrombus burden while minimizing the systemic thrombolytic effects.

Materials and Methods: This was a retrospective cross-sectional study carried out in the department of Cardiothoracic and vascular Surgery from September 2016 to February 2020. All the patients included in this study were taken from the Medical records of the hospital considering International Classification of Diseases code.

Conventional treatment of Acute Deep vein thrombosis is with Antithrombotic therapy starting with intravenous unfractionated heparin or subcutaneous low molecular weight heparin followed by oral anticoagulation with vitamin K antagonists [1]. The conventional anticoagulation prevents the expansion and progression of thrombus, pulmonary thrombo-embolism and death from venous thrombo-embolism. Approximately half of the patients with proximal Deep vein thrombosis develop symptoms of Post Thrombotic Syndrome (PTS) and one fourth with proximal Deep vein thrombosis develop chronic post thrombotic complications are severe. Trials have demonstrated that proper use of graduated Compression stockings reduces the risk of PTS morbidity by 50% [2,3]. PTS complications of acute deep vein thrombosis are because of the persistent venous obstruction and destruction of the function of the vein valve [4,5]. Catheter directed thrombolytic therapy is loco-regional delivery of thrombolytic dose directly to the venous thrombus, resulting in significant reduction of the thrombus burden with minimal systemic thrombolytic effect.

This was a retrospective cross-sectional study carried out in the department of Cardiothoracic and vascular Surgery from September 2016 to February 2020. All the patients included in this study were taken from the Medical records of the hospital considering International Classification of Diseases code. Deep vein thrombosis was identified by duplex ultra-sonography and computed tomography venogram Wherever required. PTE was identified by CT angiogram. The levels of Deep vein thrombosis was classified as Ilio-femoral, femoro-popliteal and tibial. The thrombo-check workup was not done for all patients. Tibial deep vein thrombosis was excluded in our study.

The age group between 20 years and 86 years are included with average age being 43.2 years. The peak incidence of Acute deep vein thrombosis was observed as 61 cases in our study between the age groups of 40-60 years (Figures 1-4). 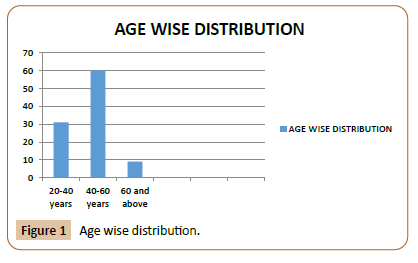 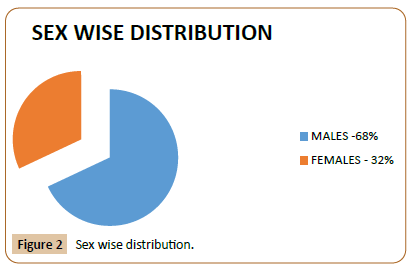 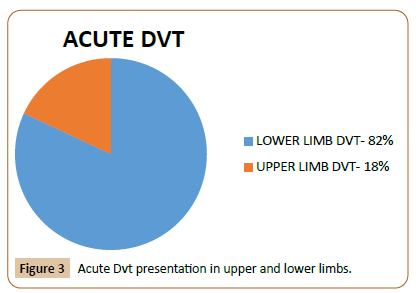 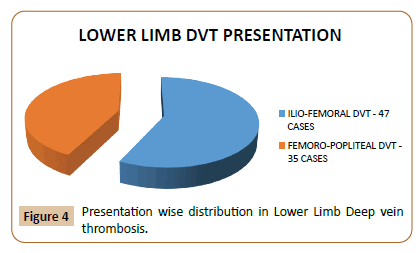 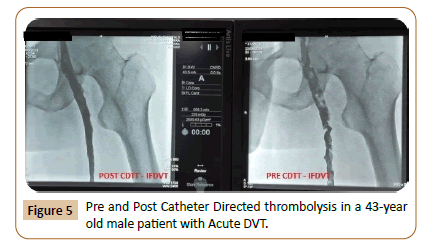 In this study we have retrosceptively analysed data of about 100 patient of acute deep vein thrombosis. This study looked primarily at symptomatic DVT with lower and upper limb pain and swelling presenting with pulmonary thrombo-embolism as main presenting feature and not the isolated Pulmonary thromboembolism. Males in our study contributed to 68% while in Indian Subgroup of Endorse and the Arrive study they contributed to 69% and 70% of the patient load [4-6].

The age-group between 41-60 years contributed the maximum cases of DVT in our study 61 cases and the mean age is 43.2 years ad it correlated with the Arrive study with a contrast to a population study conducted by Mayo Clinic in which the mean age was 61.7 years which suggests that DVT occurs in much younger age groups in Indians compared to Western [7].

The mean duration of symptoms was 8.47 days in our study, comparable to Casey Et al. who stated that there was no significant effect of duration between the onset of symptoms and the time of delivering intervention within 14 days of onset [13]. The Society of Vascular Surgery and American venous forum accepted 14 days as the Cut off for CDTT in DVT treatment [14].

During our current study, 4 patients presented with clinically relevant non major bleeding which is less than that found by Gomaa and Colleagues [8] and CaVent trail [15].

Watson et al found that thrombolysis offers potential advantages over conventional treatment by reduction in the thrombus burden and the incidence of PTS in long term particularly in Iliofemoral DVT.

Catheter directed thrombolytic therapy in the setting of acute deep vein thrombosis was safe and tolerated by most of our patients, in a way to decrease in complications of Post thrombotic syndrome, improving the quality of life of the patients. This study evaluates only one modality of treatment, additional comparative studies with other modalities of treatment to clarify the potential risks and benefits of this treatment approach.

There are no conflicts of interest.