A Mycotic Radial Artery Pseudoaneurysm in the Anatomical Snuff Box: A Case Report

Distal radial artery aneurysm of the hand is considered as a rare vascular pathology. Through this paper we report a case of a symptomatic snuff box radial artery pseudoaneurysm treated surgically by arterial ligation and aneurysm excision. The decision was based on a negative Allen’s test, an angio-CT and specially the constatation of an adequate back bleeding from the distal stump. Indeed, an accurate diagnosis and a preoperative blood flow evaluation are necessary for an appropriate management of distal radial artery aneurysms.

Upper limb aneurysms are rare and represent only 1% of all locations. The involvement of the radial or ulnar artery is even rarer [1]. Two types of lesions are defined; true and false aneurysms.

Mycotic pseudoaneurysms of distal radial artery are uncommon disease. The majority of cases of the aneurysms in the snuff box been reported were due to traumatic, atheromatous causes or idiopathic.

This paper describes a rare case of 80 years old woman diagnosed with a mycotic pseudoaneurysm of radial artery in the anatomical snuff box. Through this case report and a recent extensive review of literature, clinical presentations, imaging tools, etiologies and therapeutic modalities being used in this pathology are determined and discussed.

A 80-year-old woman, a chronic hemodialysis (3 sessions per week) was presented with a chief complaint of a swelling on the back of her right hand. A puncture and an aspiration of the mass content were performed at a private clinic. Due to the suspicion of an aneurysm, the patient was referred to our department for management. The history of the appearance of the mass was fuzzy. According to the patient, the mass has been discovered accidently just after a slight traumatism of the wrest; 4 days before being admitted in our department. No family history of aneurysms was identified in the anamnesis (medical record).

The physical examination revealed a painful pulsatile mass in the right anatomical snuff box with fragile skin and the puncture point scar facing. The peripheral pulses of upper members were perceived. Allen’s test was negative. There were no signs of other localization of arterial aneurysms. Laboratory examinations showed evidence of systemic inflammation (Leucocytosis: 21800; PCR: 300) without metabolic disorders or autoimmune diseases.

A Doppler ultrasound completed by an angio-CT showed a saccular pseudoaneurysm of palmar-radial artery that measures approximately 20mm. Considering the likelihood of aneurysm complications, especially the rupture in this case, a surgical intervention was performed urgently. Under loco-regional anesthesia, the aneurysm site was incised. An excision of the aneurysm and proximal and distal ligation of the artery were performed. The pathological and bacteriological examinations revealed a false aneurysm of mycotic cause. The post-operative follow-up was uneventful. The patient was discharged two days after vascular surgery under antibiotic treatment. The patient was symptom-free at two months follow-up (Figures 1-3). 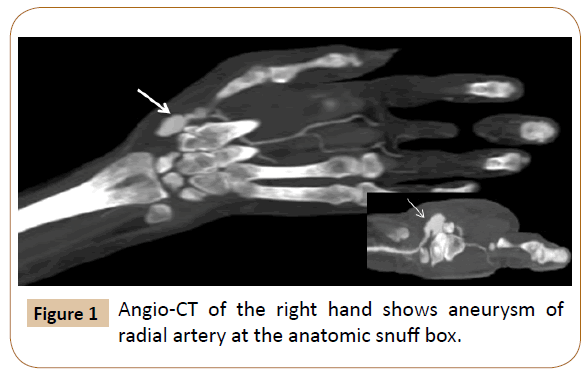 Figure 1: Angio-CT of the right hand shows aneurysm of radial artery at the anatomic snuff box. 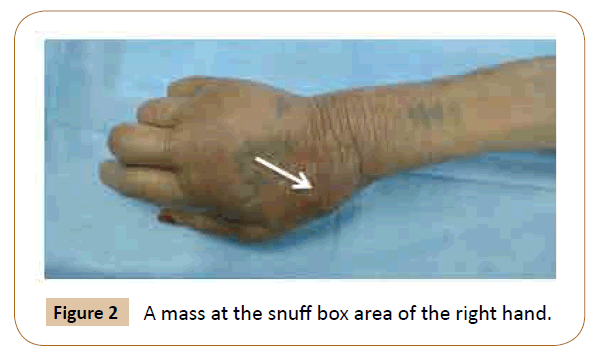 Figure 2: A mass at the snuff box area of the right hand.

Figure 3: Surgical exposure of the aneurysmal segment perforated at the anatomic snuff box (A). Excision of pseudoaneurysm and ligation of the proximal and distal radial artery (B).

The diagnosis of an aneurysm in the upper extremity can be easy in front of its typical clinical appearance by detection of a pulsatile mass. Some patients present with nonspecific symptoms ranging from an asymptomatic mass or a pain in the hand to distal ischemia, paresthesia, skin ulceration, and bleeding complications [25].

As the anatomical snuff box can be the seat of different pathologies like a ganglion, an abscess or a tumor, imaging modalities particularly duplex ultrasonography, CT angiography and MRI remain essential to confirm the diagnosis of an aneurysm and to guide the therapeutic management. Duplex ultrasonography can play a crucial role in distinguishing true arterial aneurysms from pseudoaneurysms by detecting the so-called “ying-yang” sign which is a pathognomonic of pseudoaneurysms cases [26]. In rare situations, pre-operative angiography can also be a valuable tool to help identify associated vascular pathologies (arteriovenous fistulas and malformations, fibromuscular dysplasia) and to identify the presence of collaterals.

Precise therapeutic options have been described for the management of this rare disease. It include careful observation, in case of small asymptomatic aneurysms [8,11,13]. Aneurysm excision with arterial ligation or arterial reconstruction, whether by end-end anastomosis or by vein graft in the case of aneurysmal dominant artery in order to supply the insufficient collateral blood being evaluated with a the preoperative blood flow measures. In our case, because of the high risk of rupture, the patient was urgently taken to the operating room where a surgical excision of the pseudoaneurysm and a ligation of radial artery were performed. The therapeutic decision was concluded due to the presence of adequate collateral flow and infection. A probabilistic antibiotic treatment was instituted secondarily adapted to the bacteriological result: a false aneurysm of mycotic origin. We performed a transthoracic ultrasound to look for endocarditis which could explain the distal artery mycotic pseudoaneurysm; however, it returned normal.

Radial artery aneurysms in the anatomical snuff box are exceedingly rare. They can lead to serious complications, reason why; in the majority of cases, their management remains necessary. Surgical excision of the aneurysm is the gold standard treatment option, the decision of performing revascularization requires an evaluation of the distal blood flow.

No conflict of interest was declared by the authors.